Fundraising makes a huge difference to our charity, and we were delighted to hear that Aengus Murray, from Portobello, has chosen to support VOCAL and run the Edinburgh half marathon this May!

Aengus first heard of VOCAL through two of VOCAL’s original founding members, Sheila and Alan Fletcher. When he first moved to Edinburgh, they told him about the charity and how it helps carers. Aengus cares for his partner Alex, who has Multiple Sclerosis and he has received support from our carer support team over the last few months. He said:

“I remember discussing my caring role with VOCAL and I remember the enormous amount of relief I felt when I realised they recognised me as a carer. I knew myself that I was, but it really helped to have someone confirm my thoughts and feelings.

“Although we expected Alex’s health to decline, unfortunately over the last six months she has deteriorated. This has meant I’m now providing 24 hours of care, 7 days a week. Our lives have been impacted in so many different ways, but VOCAL has been able to help us find ways to live as normally as possible at the moment, and consider the future.

“I’ve been able to meet other carers at VOCAL and talk about our experiences. It was comforting to know I’m not the only one going through this. I’ve also been able to access a break previously through VOCAL’s Wee Breaks service.

“I’m really thankful for VOCAL’s support and hope to be able to raise funds to help other carers.”

The Edinburgh Half Marathon takes place in May and Aengus is getting ready to start his training! Although he hopes to raise funds for VOCAL, Aengus explained raise awareness is really important to him as well:

“I don’t think a lot of people realise they are a carer, until someone tells them or they find out about charities like VOCAL through places like their GP practice. There are so many different situations, and I hope that someone reading my story might realise that they are also a carer.”

To support Aengus and VOCAL, you can visit his Just Giving page! 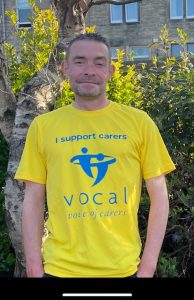 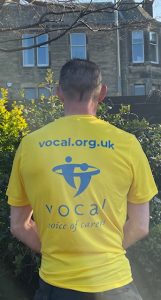